Where to even begin?!?

Budapest was our first flight as a family of 5.

The longest trip we have taken – 5 days

And the first trip where we didn’t have our own transportation.

So, lots of firsts.  We flew on EuroWings and had a great experience.  It is certainly a “no frill” airlines and the seats aren’t the roomiest, but the flight was only 45 minutes and we are short people so alles ist gut!

A short evening and then Day One
We arrived in the evening on a Monday, got checked in to our apartment, and then all crashed out.  So Tuesday was our first real day in the city.  We started off with a truly authentic Hungarian breakfast at this local bistro called “McDonalds”.  I think they are really on to something there, wouldn’t be surprised to see a few more of these around in the coming years.

For the middle part of the day, we had reservations for a tour on a bus that also swims! <– the video of us driving into the river.  The tour was given live in English but pre-recorded information in 8 other languages on a headset ensured (most) anyone would enjoy the experience as well.  We hit many of the main spots of Budapest and got a good feel for what we would like to see more of later.  The highlight for the kids though – without a doubt – was driving into the Danube River.

The tour was a great combination of the sites on dry land and the amazing river views the city is known for.  The only down side was going against the current on the return trip so the kiddos got a little restless.  Otherwise, we would highly recommend it if you ever make the journey.

Upon finishing the tour, we had some play time for the little ones in Szechenyi Square…


and a late lunch at a wonderful Hungarian restaurant Murci, then we called it a day.  Sometimes you just gotta put on some Netflix to keep the crew in decent spirits.

We always end up doing less than anticipated with #ThreeUnderSix 😉

DAY TWO
Dash-Two and dad took a walk to the US Embassy to visit the Marines there.  The city was relatively calm and we got to walk among some of the nicest parts of Budapest and stumbled upon the “Fat Policeman Statue”.  The small/accidental discoveries like this are one of the things we enjoy most about travel. 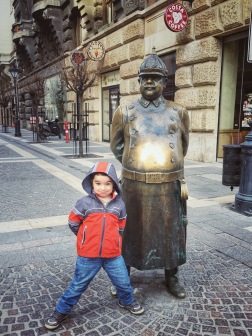 The coolest kid on the block.

We soon reached Liberty Square which, in my humble opinion, does an amazing job of summarizing the complex history of 20th century Hungary.  Liberty Square is a large park/plaza that is home to three of the primary themes of modern Hungarian history – Nazism, Communism, and Western Democracy.  There is no way to cover it all in this blog, but the city and culture is an interesting mix of these three influences.  This, of course, is in addition to the 1,000 years (yes, ONE THOUSAND) of Hungarian history BEFORE the 20th century even arrived.

On the northern corner of the square is the US Embassy. About 200 yards away and looking right at the embassy is a 7ft tall, standing statue of Ronald Reagan (democracy).  Blocking his view, though, is the Soviet War Memorial that honors the Russian soldiers who fought the Nazis to liberate the country in WWII (Communism).

Towards the front of the park is yet another memorial with a German Eagle (Nazism) attacking from above a statue of Saint Gabriel.  Very interesting as to why Saint Gabriel is so prominent in the country.  As the story goes, it was around 1100 when the Pope had a dream where Gabriel came to him and, as a messenger of the Lord, advised to Pope to give the crown to the King Hungary over other kings in Europe.  In this statue, Saint Gabriel represents Hungary.

However, this memorial has been controversial of late as the debate about how complicit the Hungarian government and people were about the Nazi mission of eradicating the Jews.

I’ll end the historical/political commentary here, but for anyone interested in 20th century history, Budapest is bursting at the seems as a literal and figurative battle ground for the century’s most influential ideologies.

Since the post about Budapest has been in the works for weeks (well, not IN THE WORKS that whole time, but you get my point), I’ll have to break this up into two posts. Hopefully it wont take a month to complete part II…
but some #ProTips before we depart!

1. Email any embassy or consulate before traveling to a city, especially the Marine security detachment. Ask to buy a coin from them and you will leave with a cool memento and almost for sure some great travel tips for the area

2. You REALLY have to manage your expectations when traveling with little ones. Plan meals as best as you can – planning the times to eat are more important than locations, but you also don’t want to be left with nothing but fancy options, either.

3. On the other hand, don’t be too intimidated to travel. From a cost standpoint, most public transportation is free and other travel has reduced prices for kids. Just gotta have a plan to keep them busy on long trips and entertained once arrived. More to follow on those points soon.

View all posts by suckers4travel

One thought on “Budapest, HUN Part I”